The Philadelphia Lacrosse Association is a non-profit organization and the local chapter of US Lacrosse — a 501(c)(3) based in Baltimore that serves as the national governing body for the sport.  The PLA supports and promotes the game of lacrosse at all levels in its chapter area, which includes Greater Philadelphia, Eastern Pennsylvania and portions of Central and Northern Pennsylvania.The PLA’s role is to encourage, foster and sponsor these developments and to serve as a resource to help the game take root and grow. The PLA Board includes both a Men’s and Women’s Division.  The PLA’s governance structure provides for a forum in which representatives of organized lacrosse meet and share ideas and information about the game, upcoming events and other lacrosse-related matters. Ultimately, the organization fosters the formation and growth of lacrosse networks among the hundreds of coaches, parents, promoters, organizers and volunteers in the area who devote so much of their time and energy for the good of the game at the local level.

PLA New Start Program volunteers have worked diligently over the years to seed and cultivate youth, middle school and high school programs in the Delaware Valley, Central Pennsylvania and, more recently, the Lehigh Valley, Berks County, Northeastern Pennsylvania and the City of Philadelphia.  The PLA continues to support Philadelphia middle school and high school teams, the latter of which are recognized PIAA sports.  The number of youth programs and high schools fielding interscholastic lacrosse teams continues to grow, and the growth of the game at all levels in our Chapter region not only reflects the dedicated contributions of hundreds of lacrosse enthusiasts but represents, in part, the evolution of a process set in motion and supported by the PLA and US Lacrosse.

The PLA also maintains the Pennsylvania Lacrosse Hall of Fame, which honors the great players, coaches, officials, promoters and others, both men and women, who have made significant contributions to the game in Pennsylvania and are deserving of the highest recognition.

Lacrosse in the Chapter Area

Lacrosse in the PLA’s chapter area at all levels is thriving, dynamic and increasingly coordinated.  The game is played at the youth level, in middle schools and high schools, at the college level, in travel programs and post-collegiate clubs and, since 1986, professionally.  Lacrosse and its celebrated history as the Creator’s Game played by indigenous North Americans is also taught in physical education programs in lower, middle and upper schools in the state.

In 1998, after making an impressive debut the previous year as an exhibition novelty, lacrosse became an official sport in the Keystone Games — the annual summer sports festival that draws many of the finest youth and high school athletes in the Commonwealth to venues around Harrisburg for the chance to compete against the best in the state. Inclusion of lacrosse in the Keystone Games, which the PLA helped engineer, is just one of the many positive developments for the game in Pennsylvania.

School boards, athletic directors, youth associations, indoor sports facilities and others are increasingly recognizing the growth and popularity of the “fastest game on two feet.”

Formation and Growth of the PLA

The PLA was formed in 1985 and since that time has grown into one of the largest and most successful chapters of US Lacrosse.  In 1998, the United States Women’s Lacrosse Association merged with and into US Lacrosse, and the USWLA’s Philadelphia District, which supported and promoted women’s lacrosse in the area, automatically became a part of the PLA.  With this and other mergers, US Lacrosse and its chapters have helped consolidate numerous lacrosse constituencies and positioned America’s truly native game to break through in the sports world of the 21st Century.

Roots of the PLA

Women’s Division:  The Philadelphia Women’s Lacrosse Association, which merged with the PLA, was established in the early 1930’s. The goal of the PWLA in the early years was to spread the game to area high schools and colleges.  Pioneers including Suzanne Cross, Libby Toulmin, Anne Townsend, and Ginger Allen helped the women’s game take root.  Later on, the PWLA was instrumental in establishing national tournaments for women.  In the early 1980s, under the leadership of Val Walchak, the PWLA organized and promoted a high school division in the annual National Tournament and created the Pennsylvania Area Schoolgirls Lacrosse Association (PASLA) – possibly the first girls’ interscholastic lacrosse organization in the country.  As a result of the efforts and vision of the leaders of the PWLA, Philadelphia area teams and players have dominated the National Club and Schoolgirl Tournaments and the USA World Cup teams for most of the past 60 years, and have assumed leadership roles for the USWLA, IFWLA and US Lacrosse. 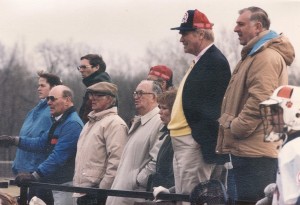 Men’s Division:  The men’s lacrosse organization started out in the mid-1970s as a loose and informal aggregation of fathers of lacrosse playing sons.  In what became known as the “The Ralph Club“, in honor of the Ralph Davy – the original Ralph, this group of fathers met socially, often spontaneously, to celebrate and embellish their lacrosse playing sons’ achievements in the high school, collegiate, and club levels of the game.   The group congealed over the years and organized the PLA as a nonprofit corporation, formalized its mission (to promote the growth of the game at the youth and high school levels), and applied for and secured chapter status with the Lacrosse Foundation – the predecessor of US Lacrosse.  The PLA was one of the earliest chapters of the Lacrosse Foundation.  In the years leading up to the merger with the PWLA, the PLA brought together representatives of the various men’s lacrosse constituencies within the Greater Philadelphia to better integrate and coordinate efforts to support the game.  The PLA promoted membership in the Lacrosse Foundation and received funding from the Foundation based on its membership numbers.  That funding, together with the funds the PLA raised through other initiatives, including the annual PLA Golf Classic, gave the PLA the resources to fund new youth and high school programs and leagues and to conduct player clinics, coaches’ clinics and annual lacrosse festivals, including exhibition games involving high school, college and club teams, as well as events featuring Team USA.  The success of Pennsylvania boys’ lacrosse on a national level bears testament to the role of the PLA in promoting the game, fostering the formation of lacrosse networks, and creating a dynamic and competitive environment for lacrosse to thrive.